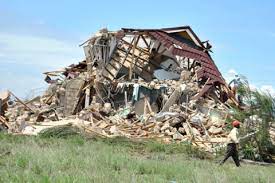 Hector Simfukwe-Over 300 houses built on Kasompe Airstrip land in Chingola District on the Copperbelt have been demolished.

Officers from the Chingola Municipal Council and Zambia Police Service started the operation around 02 hours this morning.

Initially the operation was met with resistance, as residents threw stones at the earth moving machines before the situation was brought under control.

The Council demolished houses that are under construction and those that are complete.

And, Chingola City Council Town Clerk, NAMUKOLO KALUFYANYA says the affected resident were given a warning before the exercise was undertaken today ..

Ms. KALUFYANYA said the Council’s decision to demolish the illegal structures is meant to protect the Airstrip which is a national asset and key to the economy of Chingola.

And, the affected residents have asked government to find alternative land for them.

MARY MWIINGA and JOHN MUBANGA claimed that they were offered the pieces of land by some Council officials.

Govt may declare some flood hit areas as disasters

We still have unexplored minerals-Kabuswe