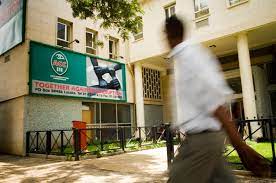 ACC Corporate Affairs Officer Jonathan Siame says Mr. Simuchoba 66 together with Enoce Kashweka, 57 a former Principal Accountant, and Linda Siwale, a Chief Planner at the Choma Provincial Administration have been jointly charged with 1-count of Willful Failure to Follow Procedure contrary to Section 34 of the Anti-Corruption Act.

Mr. Siame says this is in a matter in which the trio willfully failed to follow applicable procedure in the manner they authorized transfer of funds from a named Account without written approval from the Secretary to the Treasury.

He says Mr. Simuchoba and Mr. Kashweka have further been charged with another Count of Willful Failure to Follow Procedure involving a matter in which the duo failed to follow applicable procedure in the manner they authorized transfer of funds from the Highly Indebted Poor Countries -HIPC- Relief Account to another Account without written approval from the Secretary to the Treasury.

Mr. Siame adds that the eleven other officials from the Choma Provincial Administration and various Ministries have been arrested for fraudulent false accounting.

He says the eleven have each been charged with One Count of Fraudulent false accounting for falsifying retirement entries of various amounts of money paid as imprest, purporting to have traveled to various  Districts in Southern Province when they did not infact travel.

Mr. Siame says the accused persons are due to appear before the Choma Magistrate’s Court on the third of next month.

This is contained in a statement availed to ZNBC News in Lusaka.