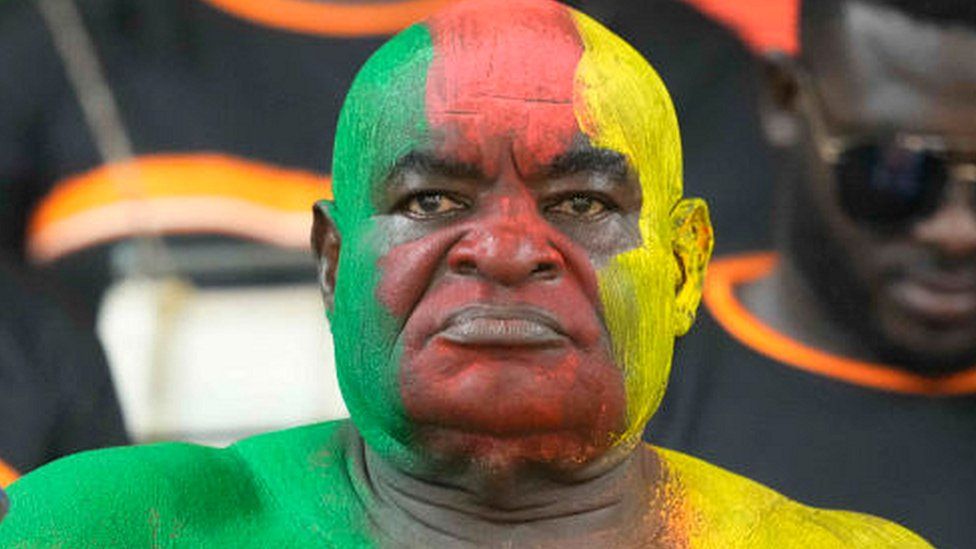 Sadio Mane scored as Senegal beat nine-man Cape Verde 2-0 in the last 16 at the Africa Cup of Nations, but was immediately forced off with concussion.

Mane curled in off the underside of the crossbar soon after keeper Vozinha had been dismissed over a nasty clash of heads with the Liverpool forward.

Mane continued despite appearing to be briefly knocked out in the incident.

After celebrating his goal he lay down on halfway, and before the game restarted he was led off the field.

The match in Bafoussam was preceded by a minute’s silence for the victims of the crush at the Olembe Stadium on Monday.

Senegal will face either Mali or Equatorial Guinea in the last eight on Sunday.

Tournament organisers the Confederation of African Football may have questions to answer about their concussion protocols after Vozinha and Liverpool striker Mane were both floored in the 53rd minute.

The Cape Verde keeper rushed out of his box in an attempt to intercept a long kick downfield by Senegal keeper Edouard Mendy, and collided head-first at pace with Mane, who had got to the ball first and headed forward.

After a lengthy stoppage a clearly groggy Vozinha was about to be substituted but, following a video assistant referee review, deserved to receive Cape Verde’s second red card for his reckless challenge.

Somehow Mane was deemed fit to continue and, after having a shot saved by substitute keeper Marcio Rosa, the forward then broke the deadlock from the resulting corner.

“He felt faint, his head was spinning and he had to go there,” said Cisse.

Mane later posted a picture from his hospital bed of himself and Vozinha on his Instagram account, adding that everything was well.

And Morocco are through to the last eight of the Africa Cup of Nations after a 2-1 victory over stubborn Malawi at the Ahmadou Ahidjo Stadium in Yaounde.

Gabadinho Mhango put Malawi into an early lead with an exceptional strike.

But Sevilla striker Youssef En-Nesyri levelled at the end of the first half and Paris St-Germain’s Achraf Hakimi sealed the win for the Atlas Lions.

Morocco’s quarter-final opponents will be either Egypt or Ivory Coast, who meet in Douala on Wednesday.

A well-observed silence was held before kick-off in memory of those killed at Yaounde’s Olembe Stadium on Monday night.

The players wore black armbands and messages of condolence were displayed on the advertising hoardings.

Morocco were clear favourites, but it was Malawi who struck first in the seventh minute with Mhango’s outstanding effort.

The Orlando Pirates star, who was closer to halfway than to goal, spotted Morocco keeper Yassine Bounou off his line and struck a powerful shot into the top corner.

A back-pedalling Bounou, returning to the line-up after sitting out Morocco’s last group game, got a hand to it but could not prevent a memorable goal.

Mhango had an excellent chance to extend the Flames’ lead after 24 minutes when he broke clear and shot just wide.

Charles Thomu in the Malawi goal made a series of fine saves, including one to deny Hakimi.

But he wasn’t able to keep out En-Nesyri’s powerful header in stoppage time at the end of the first period.

Morocco started strongly at the start of the second half but again failed to press home their advantage.

They felt they should have had a penalty when the ball struck the trailing hand of Malawi defender Dennis Chembezi, but it was rejected after a VAR check.

They finally had the lead in the 70th minute when Hakimi struck a brilliant free-kick, curled over the wall and into the near top corner.

It was no more than Morocco deserved and they will feel the margin of victory should have been much wider.

Malawi qualified for the last 16 as one of the best third-placed teams and were playing their first knockout game at a Nations Cup finals.

Despite barely having 20% possession they made sure the North Africans could never relax and tried to hit Morocco on the break until the end.

FRANCE TELLS YOUTHS TO GET INVOLVED IN GOVERNANCE

MANYINGA GETS K1M IN CDF