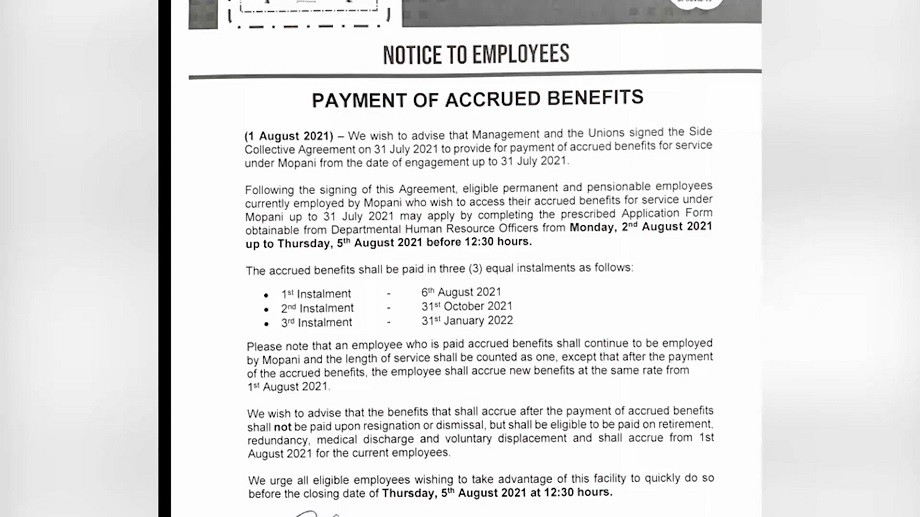 Mopani Copper Mines under ZCCM-IH has set aside over 12 million Kwacha to clear outstanding terminal benefits for 5000 miners.

The mine has started formalities to clear accrued terminal benefits for 5000 miners in three equal instalments starting Friday this week.

This was after the miners pleaded with President Edgar Lungu last week when he visited the mine to consider paying them their accrued benefits before being handed over to new mine owners ZCCM-IH.

According to a memo issued to all the miners made available to ZNBC News in Kitwe the payments will be made in three equal installments starting from August 6th, October 31st, 2021 and January 31st, 2022.

And a check by ZNBC News at the Mopani Central offices in Kitwe found the miners in a queue waiting to be registered in readiness for payment on Friday this week.

The statement further indicated that the miners shall remain Mopani employees even after the payment of accrued benefits.

And Mine Workers Union of Zambia president Joseph Chewe has commended President Lungu for considering the plight of the miners.

Mr Chewe said President Lungu and the PF government have managed to save thousands of jobs at Mopani and Konkola Copper Mines through his timely intervention to take over the two mines.

He added that the decision to pay miners at Mopani and KCM their accrued benefits will improve their livelihoods.

SAMFYA TO GET NEW MARKET – ECL

SOLDIERS IN TORTURE VIDEO UNDER PROBE