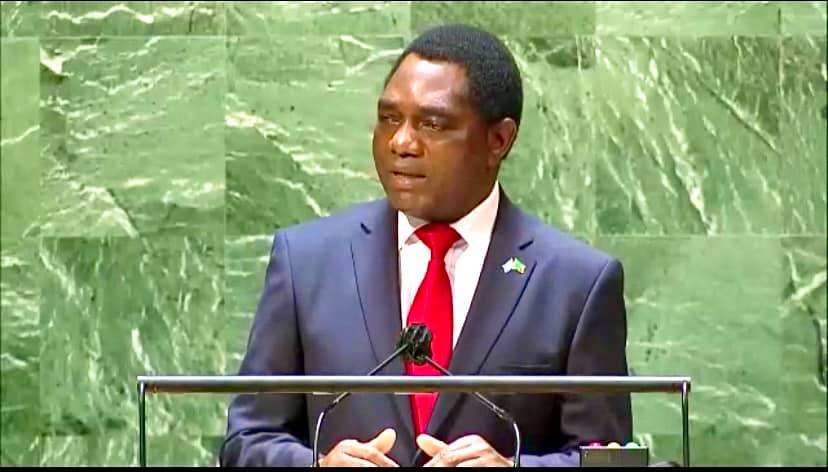 President HAKAINDE HICHILEMA has addressed the 77th United Nations General Assembly with a call on leaders to work together to deal with global challenges such as the Ukraine War and Climate Change among other issues affecting the attainment of Sustainable Development Goals (SDGs).

President HICHILEMA said the United Nations should adopt a new form of multilateralism where challenges that affect humanity are addressed  collectively by all nations.

The President said the Ukraine War is one example that has reversed gains that countries were making to tackle poverty.

He said ending War is not only the responsibility of those directly involved but all nations.

President HICHILEMA added that this is because the consequences of War such as the looming food shortage caused by the War affects almost everyone in the world.

And President HICHILEMA said Zambia supports the establishment of the UN Youth office which will help young people across the world in areas such as entrepreneurship and dealing with other issues affecting them.

During the address, President HICHILEMA also called on World leaders to invest more in resilient Health Care systems which will enhance response to future pandemics.

The Head of State said Zambia has put in place health systems that are strengthening response to outbreaks such as Polio, Cholera and Malaria among other diseases.

And President HICHILEMA said Zambia will be presenting its quarterly review towards the implementation and attainment of SDG’s in Zambia.

The President also updated the assembly that Zambia is on the path of growth from economic contraction experienced in the past.

He said the economy has in the last 12 months grown by about 3-percent.

President HICHILEMA further said Government is also working to improve Education standards in the country through the provision of free Education and recruitment of more than 30-thousand teachers in Public Schools.

This is meant to ensure inclusive and sustainable economic growth.

On debt, the President said Zambia has reached a conclusion towards a debt restructuring programme with its creditors.

On Climate Change, President HICHILEMA asked World leaders to put up a robust and coherent solutions to address the effects of Climate Change.

He said the solutions should include financial support to poor countries.

President HICHILEMA noted that Zambia has mainstreamed a green economy by including sustainable development mechanisms in the 8th National Development Plan.

The 77th  UN General Assembly is being held under the theme “A watershed moment: transformative solutions to interlocking challenges”