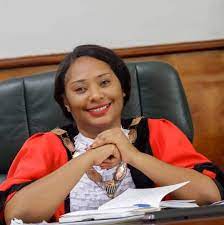 Police in full riot gear were at the venue  where the UPND received the defectors.

Copperbelt UPND provincial chairman ELISHA MATAMBO and other UPND senior members of the National Management Committee were present to receive the defectors.

In receiving the defectors, Mr. MATAMBO said he will not be intimidated by disgruntled youths who want to bring confusion in the party.

Mr. MATAMBO said in UPND there is room for all the 18 million Zambians.

He said the party is focused on growing and that no amount of distraction will stop the leadership from growing the institution .

Mr. MATAMBO also took time to explain to the people of Kalulushi some of the achievements that the new dawn administration has scored so far..

UPND Kalulushi District chairman MATHEWS SONGWE assured the UPND leadership that the party in the district with all it’s structures are intact .

Mr. SONGWE said all the new members joining the party should feel free to contribute to the growth of the party not only in the district but province at large.

And speaking at speaking at the same event former Kalulushi Mayor RASHIDAH MULENGA said she has decided to join the UPND because of their good policies that they are implementing.

Ms. MUKENGA who has joined the UPND together with her husband Godfrey CHIPASHA said many countries that have developed have done so through decentralisation which the UPND is implementing through the increase of CDF.

She said he has defected together with over one thousand of her supporters.

SOME YOUTH RESOURCE CENTRES TO BE COMPLETED BY JUNE

“ENGAGEMENT OF INVESTMENT PARTNERS IS FOR ZAMBIA’S BENEFIT”