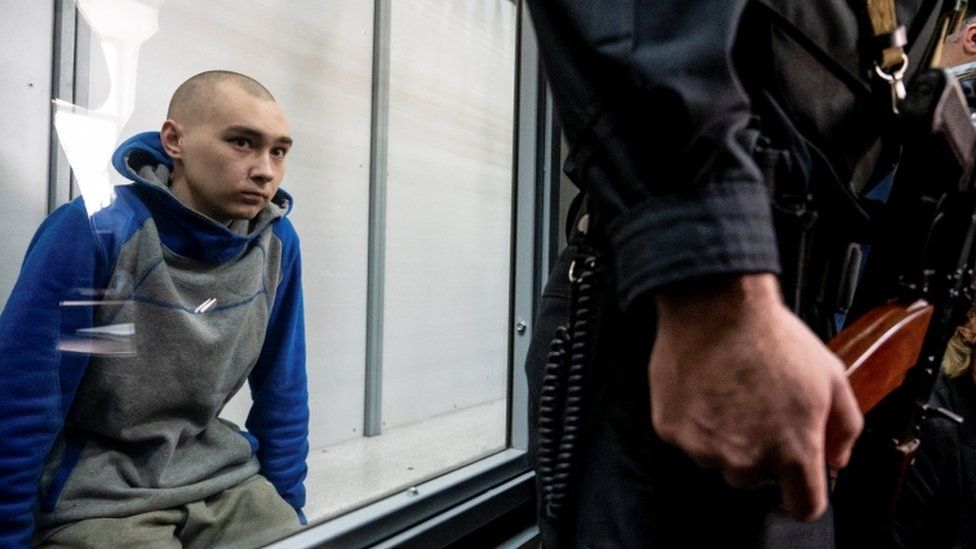 (BBC) A 21-year-old Russian soldier has pleaded guilty to killing an unarmed civilian, in the first war crimes trial in Ukraine since the war started.

Vadim Shishimarin admitted shooting a 62-year-old man a few days after the invasion began. He faces life in jail.

The prisoner was brought into the tiny Kyiv courtroom in handcuffs, flanked by heavily armed guards. He looked nervous, and kept his head bowed.

The widow of the man killed was sitting just a couple of metres from him.

She wiped tears from her eyes as the soldier entered court, then sat with hands clasped as the prosecutor set out his case, describing the moment Kateryna’s husband, Oleksandr Shelipov, was shot in the head.

“Do you accept your guilt?” the judge asked. “Yes,” Shishimarin replied.

“Yes,” he replied quietly from behind the glass of his grey metal-and-glass cage.

Prosecutors say Shishimarin was commanding a unit in a tank division when his convoy came under attack.

He and four other soldiers stole a car, and as they travelled near Chupakhivka, they encountered the 62-year-old on a bicycle, they said.

According to prosecutors, Shishimarin was ordered to kill the civilian and used a Kalashnikov assault rifle to do so.

The Kremlin said earlier it was not informed about the case.

Shishimarin’s trial was adjourned shortly after the civilian’s widow heard for the first time the Russian soldier admit to the murder. This high profile hearing will restart on Thursday in a larger courtroom.

Oleksandr’s widow told the BBC how she was coping, before she left the court for the day.

“I feel very sorry for him [Shishimarin],” she said. “But for a crime like that – I can’t forgive him.”

Ukraine has so far identified more than 10,000 possible war crimes committed by Russia.

The country’s chief prosecutor Iryna Venediktova tweeted: “By this first trial, we are sending a clear signal that every perpetrator, every person who ordered or assisted in the commission of crimes in Ukraine shall not avoid responsibility,”

Moscow has denied its troops have targeted civilians, but investigators have been collecting evidence of possible war crimes to bring before the International Criminal Court (ICC) in The Hague.

The ICC is sending a team of 42 investigators, forensics experts and support staff to Ukraine. Meanwhile, Ukraine has also set up a team to preserve evidence to enable future prosecutions.
Post Views: 240
I Like ThisUnlike 0
I Dislike ThisUn-Dislike 0
Previous Post

MUBANGA CALLS FOR SUPPORT FROM JAPAN