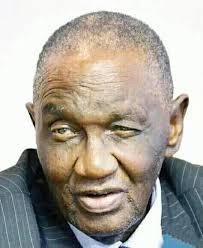 Acting Secretary to the Cabinet, PATRICK KANGWA confirmed the death of Mr Wina who died at the University Teaching hospital this morning after an illness.

Mr KANGWA said Government regrets the death of Mr. WINA who was the First Minister of Health in the UNIP Government.

He said in a statement to ZNBC that cabinet is working with the family of the late Mr. WINA on the funeral arrangements after which a detailed burial programme will be released.

Mr. KANGWA has urged the public to ensure the COVID -19 Guidelines are observed during the mourning period to avoid the spread of the disease.

The funeral gathering is being held at Mr. WINA’s residence in Mimosa – Chilanga District.

The late Mr. WINA was the last surviving member of the first Cabinet of Dr. KENNETH KAUNDA in 1964.

He is acclaimed for having served as a Cabinet Minister in UNIP for over ten years.

Mr. WINA also served as Deputy Speaker of the National Assembly under the Movement for Multi-party Democracy -MMD from 1991 to 1993.

Prior to his death, Mr. WINA told ZNBC news how he would like to be remembered.