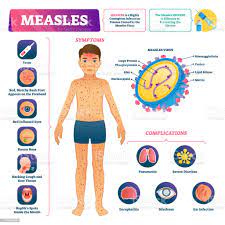 Michael Kaumba-Three children have died from suspected measles infection in MUSHINDAMO District in North Western following an outbreak of the disease in the area.

Health Minister SLYVIA MASEBO said this in a statement read on her behalf by Permanent Secretary for Technical Services LACKSON KASONKA at a covid-19 update in LUSAKA today.

Ms MASEBO said the outbreak has affected the unvaccinated population in catchment areas around Mutubanya and Kashiba health post which started in March 2022.

She said the victims were never taken to the health facility for medical attention and further appealed to the public to ensure their children are vaccinated against measles as vaccines are readily available a.

And, Ms MASEBO said the country recorded 732 confirmed Covid -19 cases, 3 deaths, and 459 recoveries as of today as compared to 471 confirmed cases, 1 death, and 558 recoveries in the last week.

Ms MASEBO said the country has continued to record cluster cases in congregate settings including schools and work places in the four Districts.

She however said the ministry is encouraged by the low hospitalisation of covid -19 positive patients although the majority being admitted are the predominantly unvaccinated elderly people and those with underlying conditions.